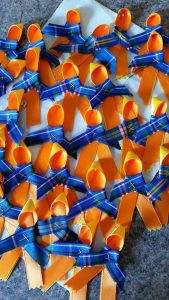 Yellow and orange were shown to be the two most frequently used colours in suicide prevention awareness around the world. The Canadian Association for Suicide Prevention (CASP) also believes orange and yellow colours illicit feelings of hope, like the dawning of a sunrise on a new day. The CMHA NS CAST Program put a face to suicide prevention awareness and the CAN ribbon with the addition of the yellow hood and a warm East Coast accessory – a Nova Scotia tartan scarf.[1]

Individuals/Groups/Businesses/Organizations can place CAN ribbon orders to:

CAN ribbons can be ordered by contacting the CMHA NS CAST Program:

Together We CAN Prevent Suicide in Nova Scotia!